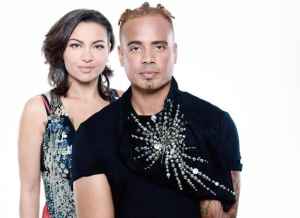 First released as an instrumental in spring 1991, "Get Ready For This" received an immediate success (#2 in the UK charts). Conscious of their popularity, Wilde & De Coster wanted a more accessible, formatted formula for their project to grow. Raymond Lothar Slijngaard was then contacted to write lyrics and add a rap to the track. On his suggestion, Anita Dels (a singer from the Amsterdam club scene) joined in as the female vocalist. The new re-version of "Get Ready For This" was released in september 1991 and helped to perpetuate the success of 2 Unlimited around the world.
The following single, "Twilight Zone", did even better in the charts and became a well known club anthem. A full album announced two more successful tracks: "Workaholic" and "The Magic Friend".
Their second opus, "No Limits!", was released in 1993. It's popularity was such that no more than five singles were taken out of it. Among them, "No Limit" and "Tribal Dance".
The single 'No Limit' became their biggest hit. It reached number one in more than 35 countries and was the best selling single of 1993 in Europe.

In 1996, a complicated relationship between Ray and Anita precipitate the breaking of 2 Unlimited. For a moment, a background vocalist was due to replace Anita beside Ray, but ultimately, she refused the contract offered to her. A relaunch attempt (2 Unlimited 2) featuring two female singers (Romy (2) and Marion Van Iwaarden) was tested, but only had a mitigated success. Both singers left once their contracts ended in 1998.
Recent petitions asking for the return of 2 Unlimited were ignored as Ray and Anita do not wish to work together again.

February 8, 2022
Sure they were considered cheesy commercial and a joke at the time and not long after,....
But look back. See what came after? Cascada, Basshunter, Lasgo, DJ Sammy, Ultrabeat. come on, 2 unlimiteds tunes absolutely obliterate that trash.
Reply  See 2 replies Notify me 2 Helpful

September 6, 2020
2 Unlimited made some great tunes i agree but during 1994 to late 90's their quality falls flat to be more annoying since Eurodance during that time never evolved anymore it was the same mechanic over and over a male rapper dude with a female singer vocalist usually beautiful and wears sexy outfits and what not and a pair of dancers to make it complete . Also their clips were somehow similar only good times is MTV still existed !

Their first track "Get Ready for This" was widely known and liked ( even though i don't like that tune because it was on every radio , tv and all cd compilations it was simply too much for me ) .

Whereas Twilight Zone did much better as that track and was used in a video game TV programm in Belgium RTBF named "Luna Park" with Sam Touzani .

Workaholic and No Limit were both excellent as with what came later with Magic Friend and other tracks their quality dropped to oblivion . Kinda similar faith happened to many of these Eurodance artists .
Reply  See 5 replies Notify me 1 Helpful

the songs no limit tribal dance. twilight zone. here i go. burning like fire. let the beat control your body. get ready for this. no one. the real thing. faces. maximum overdrive they were all awesome tracks al of the others who said that 2 unlimited is no good they sdon't know nothing about good music go and listen to justin biber and otjhers bad singers of today's bad music

hey i like these guys. they are mostly cheese, and not like true electronic music like frankie knuckles and 808 state before them, or sasha and digweed after them, but they made catchy music that i personally liked. they were more of a forgettable trend as the industry went towards trance and artists like 2u and snap! weren't big anymore. at the end of the day, it comes to personal preference, and i like these guys, and early 90s eurodance in general.

April 14, 2016
Listen. Cheezy or not, they were pioneers. "House music" became popular on the radio stations in that time. And because of that we in the Netherlands and Belgium grew up with it. Look at the scene in our countries. The number of parties, festivals and dj`s that originated here are huge. Al of it went global. At that time the tunes were massive AND they are a not that bad. If I hear the tunes it brings me back to my younger years, and it gives me great satisfaction. It doesn`t mean I don`t have a good music taste. My favourite songs of all time are for example are records from Deep Purple, The Stones, Metallica, ELO, Joe Jackson, Guns `n roses, Black Sabbath, Duncan Browne and on and on... 2 unlimited has it`s place in music history here and it`s very significant AND important.
Reply  See 1 reply Notify me 9 Helpful

December 24, 2010
They came from nowhere and they created one the best techno tune of all times "Twilight Zone". Doesn't it tell you a lot? I know you think it is cheeezy track now, but on 1992 it really blowed everyone's mind. I thought can you do that, can you change dance music into this?? It was something totally different than ever before! Previously we had Black Box and Technotronic moving us from traditional 80's disco sound into something else, but 2 Unlimited really blowed the bank by introducing "Get Ready For This" and little later really floorfiller new techno (who knew that word on early -92? It was introduced a little later on spring/summer 1992...) sound by introducing "Twilight Zone". It had hard style synth riff and nice female vocals. The first album was a milestone on machine music. They had some good tunes later too, but they did not meet the high expectations of the public.
Reply Notify me 5 Helpful

2 Unlimited were the most popular and famous of the many early to mid 90's eurodance acts to emerge after the ashes of the late 80's Technotronic style acts. Combining pop-diva style female vocals with inoffensive male rapping over melodic eurodance sounds, the commercial formulation sold in millions and of course sickened purists to the core.

However, whereas many of these eurodance acts were one hit wonders (or at very best one album wonders), the Dutch duo of Ray & Anita managed to release three full albums over the course of four years. From their first releases, the pop-rave of Get Ready For This and the harder more Belgian Techno influenced Twilight Zone & Workaholic (the producers being Belgian of course) through to their final outings such as The Real Thing and Jump For Joy the band produced a steady flow of memorable and catchy songs.

Much lambasted for "shallow" lyrics and bombastic sound by many music critics, as a young teenager I was blissfully unaware of such delusions of grandeur. I enjoyed the songs, and it was always cool to see the band on tv shows. They truly were one of the more personality based acts, unlike so many cardboard cutout copycat acts who only got a break due to their modelling work (and who mimed their way through every performance over vocal samples).

2 Unlimited's biggest moment came with their 1992 european number 1 hit single No Limit. It was to be their crowning glory and their biggest source of ridicule. The UK television show Spitting Image parodied the song & the band in a puppet sketch, and to this day this is how many British people remember the band.

For those who care to remember, they had many better moments than No Limit. Singles such as Faces, Let The Beat Control Your Body, Tribal Dance, The Real Thing, Do What's Good For Me, Nothing Like The Rain and countless album tracks like Contrast, Desire, The Power Age, Invite Me To Trance, What's Mine Is Mine and Info Superhighway attest to this.

They deserve their mantle as the King & Queen of Eurodance.

Long may they reign.

Look at the releasedate of their first productions. in 1991, this sound was fresh! There was no eurohouse to speak of at that time. it was just rocking techno.

Sure, it turned really ugly really fast. But they are not without their merits.

Ayone who says otherwise is only remebering the latter periods when these guys churned out one godawful tune after another.

And the eurohouse fad would have come to fruitation anyway, so you cannot really blame wilde & de coster alone.

The list of their releases is quite 'impressive' due to here's updates but 2 Unlimited never achieved controversy or the underground appeal of other contemporaries (such as Snap! now that we bring them to mention). They actually succeeded to use their fifteen minutes of fame as techno and rave culture began to take over in the early 90s - but as with every interesting genre, they're just as equally guilty for killing off dance music in its worst sense - in the same package as Reel 2 Real, DJ Bobo, Sash!, La Bouche, Corona, Masterboy and U96 to name a few...

The only track that almost had had it, is one and only 'The Magic Friend'... If only 2 Unlimited had a little more in their heads than in their studio, 'The Magic Friend' might have extended into something more prominent or say, effective...

'Workaholic' and 'Twilight Zone' were there before (the latter being typical cliche over popular TV series flirt), trying to sweep our brains out with their synth-riffs but in the end it turned out there was very little to it - a typical overnight sensation, with smash hit 'No Limits' that remains one of the worst quasi-techno anthems of all times. You cannot tell whether it is Ray's godawful wannabe American rappin' and Anita's ridiculous rhymes or electro's cheapest matrix adding insult to injury.

Music that's embarrasing to listen to.