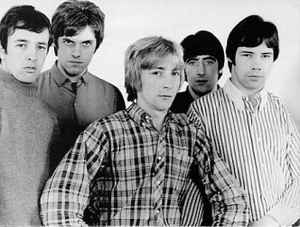 Profile:
The Action were an English band of the 1960s. They were favoured by the mod subculture, and played soul music-influenced pop music.

Shortly after their formation, they signed to Parlophone. "Land of a Thousand Dances" b/w "In My Lonely Room" was well received by critics, but sold poorly. None of the Action's singles achieved success in the UK Singles Chart.

After disastrous experiences with the Rikki Farr management, Peter Watson (born in 1945, Kings Cross, London) left the band in 1966. They continued as quartet, but were dropped from Parlophone in 1967. In the late 1960s keyboardist Ian Whiteman (born 18 May 1945, Saffron Walden, Essex) and guitarist Martin Stone (born 11 December 1946, Wokingham, Surrey) joined the band and the Action moved toward a mid-tempo psychedelic ballad style, and then into folk rock. Reg King left the band in 1967, and Alan King took over as main lead vocalist. In 1969, when signing to John Curd's Head Records, the band was renamed Mighty Baby.

Notably, they are one of the favorite bands of Phil Collins, who performed with the reunited band in 2000. "For me it was like playing with the Beatles", he later commented on the experience.
Sites:
actionmightybaby.co.uk, theactionbook.com, Wikipedia
Members:
Alan King (3), Ian Whiteman, Martin Stone (2), Mike Evans, Pete Watson, Reg King, Roger Powell (2)
Variations:
Viewing All | The Action
Action, The Action!