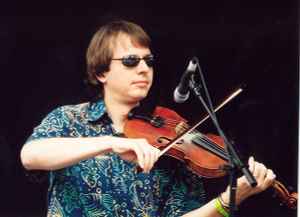 Born in Quantico, Virginia and raised in Santa Paula, California, where he played in the school band, he has been a member of the The Nashville Bluegrass Band since 1985, and is a much-in-demand session musician who has worked with such stars as George Strait, Dolly Parton, Reba McEntire and Barbra Streisand, to name a few.

As a member of the Nashville Bluegrass Band, he won the Grammy Award for Best Bluegrass Album in 1994 and 1996, and was named the Academy of Country Music Fiddle Player of the Year for 1996, 1998, 1999, 2001, and 2004, and Specialty Instrument Player of the Year for 2006. In 2006, he toured with the Mark Knopfler/Emmylou Harris "Roadrunning" tour and is on the "All The Roadrunning" and "Real Live Roadrunning" albums. In 2008, he toured with the Robert Plant/Alison Krauss "Raising Sand" tour, to much acclaim. He appeared on the "Transatlantic Sessions Series 4" broadcast by the BBC in September/October 2009.
Sites:
stuart-duncan.com, nashvillebluegrassband.net, Wikipedia, repertoire.bmi.com
In Groups:
Peter Rowan's Reggaebilly, The Nashville Bluegrass Band, The Sugarcanes
Variations:
Viewing All | Stuart Duncan
S. Duncan, Stewart Duncan, Stuart, Stuart I. Duncan