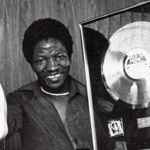 Profile:
Born in 1951, like many migrant workers Sipho had come to Johannesburg in search of work. In 1969 he tracked down a white boy who was infatuated with Zulu culture and challenged him to a guitar duel in his kitchen. This sparked off a friendship and musical partnership with Johnny Clegg, and they started playing together as a duo under the name of "Johnny and Sipho".

Adding additional instrumentation and band members, they formed a proper and ground-breaking band under the guide of Hilton Rosenthal. The band's name? Juluka.

Juluka was disbanded in June 1985 as Mchunu returned to his five wives and Zululand roots to herd the family cattle and become a livestock farmer -- although he did make some solo recordings afterwards, financed and promoted by Clegg.