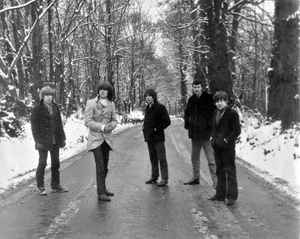 Profile:
July were a psychedelic rock band from Ealing, London, UK, that were professionally active between 1968 and 1969. They grew out of The Second Thoughts and The Tomcats (2). The band's music was a blend of psychedelic rock and psychedelic pop, marked by lush harmonies, acoustic guitars, keyboards, and intricate lead guitar work.
Although none of the band's records managed to chart in the UK or the US, July are today best remembered for their songs "My Clown", "Dandelion Seeds" and "The Way", which have all been included on a number of compilation albums over the years.
July reformed in 2009 with four of the original members: Tom Newman, Pete Cook, Chris Jackson and Alan James, recording further albums.
Sites:
Wikipedia, Facebook
Members:
Alan James (19), Chris Jackson (6), Jon Field, Peter Cook (4), Tom Newman (2), Tony Duhig
Variations:
Viewing All | July (3)
ジュリー