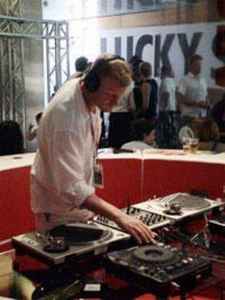 Funkturm transmuted from Operation Mind Control, who released one album - Funkturm - on D.O.R. in 1994, as well as three cassette-only releases on the cult Chainsaw label from 1990 to 1993.

The debut Funkturm album, Urban Mantras, is 9 tracks of minimalist breakbeats and hypnotic soundscapes. Funkturm takes its name from Berlin's radio tower. The name was chosen because of a fascination with the sounds and textures of international short-wave radio broadcasts. Radio sounds have been used throughout previous releases.
A new album - provisionally titled Bon Tempi - is currently in progress, to be released later in 2001. The album is likely to feature more organic textures and instrumentation, heralding a return to the more improvisational nature of previous projects, melded with the hypnotic electronic rhythms and structures of Funkturm / Operation Mind Control work to date. The new material will be previewed on this site throughout the duration of recording. Stay tuned.
Sites:
funkturm.co.uk, MySpace
Aliases:
Operation Mind Control, Richard Gallon