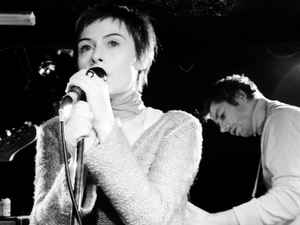 Profile:
Amp is an English group based around the core members Richard Walker and Karine Charff. Walker was a member of a band in Bristol called The Secret Garden that incubated a number of groups including Flying Saucer Attack and Third Eye Foundation. In 1992 he left the band; singles from Amp began to come out on a number of small English labels and a debut album called Sirènes was released in 1996 on the Wurlitzer Jukebox label in the UK and a short-lived American label called Petrol. Walker made some guest appearances on Third Eye Foundation recordings, and Matt Elliot did a TEF remix of Amp music for the In Version album. A London-based, live Amp unit coalesced around Walker and Charff with Walker's bandmate from The Secret Garden, Gareth Mitchell, joining on guitar. Amp contacted Kranky when their American label dissolved and began work on a new studio album in summer 1996.
Sites:
ampbase.net, Bandcamp, Facebook
Aliases:
A.M.P. Studio
Members:
Karine Charff, Matt Elliott, Matt Jones (3), Olivier Gauthier, Richard Walker
Variations:
Viewing All | Amp
A.M.P., a•m•p•

November 7, 2007
AMP is probably one of the most underrated shoegaze/experimental rock groups that came from the scene in the 90's. The reason for this is probably the unstable quality of their releases. When "Sirenes" was (in a way) a masterpiece, its successors didn't really bring anything new to the table, and the band went downhill ever since. Still, the later albums include some gems that shouldn't be overlooked.

I certainly hope they manage to put out an another album that holds the same structure and quality that "Sirenes" did, since this type of music doesn't come out too often.