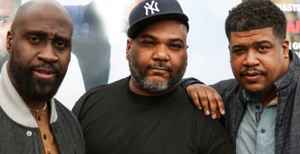 May 20, 2022
Amazing album, start to end, deep chill out tunes, take a seat, a nice drink and enjoy
Reply Notify me Helpful

November 16, 2020
Is there an instrumental for "Sunshine" available anywhere? Would love to get that...
Reply Notify me Helpful

March 3, 2020
All of the De La Soul songs should've have that Turntable scratches break in 2000 album.
Reply Notify me Helpful

February 26, 2019
If anyone is interested, Vinyl me Please is finally having 3 feet high and rising as their record ov the month! Remastered from the original analogue tapes, splatter 2LP, quite possibly the best version ov that album to own. Just giving all the peoples a heads up.
Reply Notify me 2 Helpful

I love the J dilla production and some of the songs they did together. Very nice sound!

May 5, 2010
De La Soul are just about the only rap group I can say are almost "perfect". De La Soul have made more unique and original material than I can count. De La Soul aren't one of those groups that got better over time, they were brilliant from day one. That is, when they released their highly influential debut album '3 Feet High and Rising' which has received multiple 5 star reviews from multiple magazines and websites. Won't believe me? To name some of those magazines and websites: Rolling Stone, Allmusic, Village Voice, and RapReviews.com and the millions of De La Soul fans out there (like me).

De La Soul also aren't one of those groups that makes a really good debut album and then starts making garbage. No. They stayed consistent throughout and to this day. Their second album, 'De La Soul is Dead' was initially misunderstood but then became an underground classic. This was the same case with their third and fourth albums, 'Buhloone Mindstate' and 'Stakes is High' which have also gotten great reviews from the underground. De La Soul stopped making albums for four years and then released 'Art Official Intelligence: Mosaic Thump' which wasn't as acclaimed as the other albums but was still very good. They released the second of their Art Official Intelligence series with 'AOI: Bionix' which was just as good as 'Stakes is High'. Their seventh studio album 'The Grind Date' was easily one of their best albums to date. Nearly every song on that album is perfect; lyrically and musically. Then they released 'Are You In?: Nike+ Original Run' which got the same ratings as 'Buhloone Mindstate', 'Stakes is High', 'AOI: Bionix' and so on.

Another thing that makes De La Soul a really good group is that they never sold out to the mainstream. They've been keeping it real through their whole career. The only moments where De La Soul have sort of sold out is when they collaborated with Sean Paul in their European bonus track for 'The Grind Date' (Which they only did because of Sean Paul's popularity in Europe, otherwise they wouldn't have done that). Their collaboration with Japanese pop star Double in "Say 'I Gotta Believe!'" (Which was made for the Japanese video game Parappa the Rapper). And their collaboration with the boy band LFO (Which I got to admit was pretty bad. But there must be an explanation for this, they were probably friends with one of the guys). But all these collaborations are fairly obscure and they must have an explanation.

Otherwise, I would highly recommend De La Soul. The only group that I can say is perfect. A very rare case.
Reply  See 3 replies Notify me 1 Helpful

One of hip-hop's most inventive groups bringing forth jazz rap, intellectual rap and the Native tongue movement. They have shifted quite a lot from the original innocent style they had back in the early 90's, thus losing a lot of their original attractive force.

IMO there's two albums you MUST get, the others aren't so much classics. They are 1) 3 Feet High and Rising (THE classic everybody knows) 2) De La Soul is Dead (misunderstood when it was released, but since then it's become an underground classic and rare). Buhloone Mindstate is in its way a good album, but like the other De La albums it doesn't come anywhere close to these two.