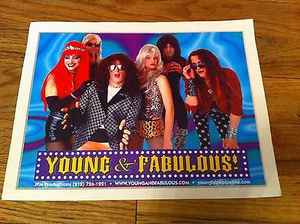 Profile:
Young & Fabulous was a New York City based over the top glam band in the mid to late 1990s. The heavily made up band featured Chauncey R. Fabulous on vocals. Over the years the band was active, many members came and went, but Chanucey was always there as the chief songwriter and frontman. After releasing the band's second full length album in 1999, the band morphed into Skum, and brought in a female lead vocalist.