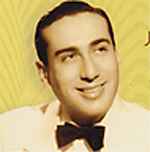 Update from Don Cole's Rock History 101 ( December 26, 2018 ):
Few may know this but Jerry and his wife Ruth were shot February 17,1965 by their 22 year old son who said his parents were "bugging him".
They were taken to the UCLA Medical Center where attendents reported that Jerry had been shot in the arm and Ruth in the chest. Both were in good condition.
This info was first posted in Cashbox magazine the week of February 21-27, 1965.