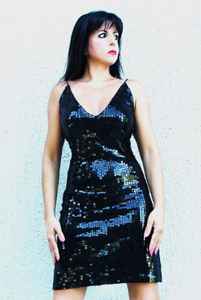 Real Name:
Simona Attanasio
Profile:
Xeya's career started in 1987 with her debut-single "Say the word" which was produced by the magical duo of producers Rosa-Politi.

In 1990, with the artistic production of Natale, Turati, Melloni (the famous trio of producers of Italo-Dance Music), Xeya released "Deputy of Love", a smash-hit single which was distributed worldwide. With "Deputy of love" (a huge club hit in Europe and North America) she established herself as a true European sex symbol and one of the major singers of Italo-dance music.

In 1993 the musical group DPR chose her as leading vocalist for a cover version of a classic hit of Blondie "Call me". This single became a smash-hit in Europe. In 1995 "Call me" was licensed and distributed in Canada and it became a huge success both in clubs and radios. In Canada Xeya was invited to join Bananarama, Whigfield and other international well known artists for the Energy Rush Tour. During this tour Xeya's sexy performances in front of thousands of people made the International Press more and more interested in her.

In 1994 as leading vocalist of DPR, she released a brand new smash-hit "Take me", a groovy and melodic italo-style tune, where she could express her voice and natural artistic talent. In the same year, due to the big success of "Take me", another single was produced and distributed ("Love 4 anymore") which confirms her success and popularity in all of Europe.

"Kiss me" was released in 1995. This is the best track recorded by Xeya which soon became a Italo-Dance Club Anthem in many Countries around the world. Due to its huge success, this smash hit was remixed by various DJs and producers (DJ Santy, DJ Omh and DJ Napo).

In 1996 A new original single, "Sweet Fantasy", established Xeya as one of Italo-disco queens. Xeya became one of the most successful Italian artists in many countries in Europe.

In 1997 Xeya's voice was used in some ambient-house singles and she became the leading vocalist of some interesting musical projects, such as the single "Fire Byrd", which became club-hits in many countries
Sites:
xeya.it, Facebook, Facebook
Aliases:
Simona Attanasio
Variations:
Viewing All | Xeya
Xena