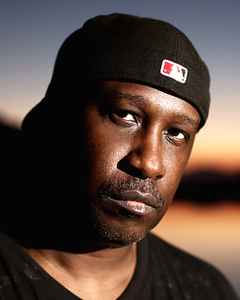 Real Name:
Todd Norton Terry
Profile:
Born 18th April 1967 in Brooklyn, New York, pioneering American house producer & DJ, Todd Terry is one of the producers who helped to define New York's house music during the 1980's. His productions can be described as a varied collection of samples blending the sounds of classic disco, the more introspective Chicago sound pioneered earlier in the decade, plus plenty of hip-hop attitude and sampling piracy.

Much of Terry's early work in the late 1980's is considered a milestone in the development of both progressive and modern deep house. He has been responsible for releasing two of the most respected crossover remixes of the house era: "I'll House You," by the Jungle Brothers and "Missing," by Everything But The Girl in the mid 1990's.

Among his fans, Terry is known as "Todd the God," "God Terry," "Todd Godrry," "Godd Gerry," (or, occasionally, simply "God," because he might be a Five Percenter, but this is unconfirmed).

His tracks "Something Goin' On," and "Keep on Jumpin'," were both UK Top 10 hits as well as US Hot Dance Music/Club Play #1's, with the vocals provided by Jocelyn Brown and Martha Wash. Freestyle diva Shannon was the featured vocalist on the Top 20 hit "It's Over Love," in 1997.

He has used several aliases such as Swan Lake, Orange Lemon, Royal House, Black Riot, CLS, Masters At Work (2) (although he later gave this moniker to Kenny "Dope" Gonzalez & Louie Vega in 1990), Dred Stock, House Of Gypsies, Lime Life, Hardhouse and the Gypsymen.

November 19, 2017
Can anybody tell me the original mix of Just Come that K-Klass did with TT?
There's a monster mix somewhere and I've been looking for years and years and cannot find the thing..

Any help would be amazing!

PS. I know it originally stems from Just Come by Kool Jack, but the mix I'm after has THAT amazing hi-hat sound..

March 28, 2017
Full respect to a guy from New York for helping to inspire European Techno.

Shit like A Day In The Life & Can You Feel It helped shape European rave music.

Todd had a knack for taking just a few samples and turning them into monster house bangers. No one compares to Todds sound, it is instantly recognisable.

April 19, 2004
A true pioneer in dance. From day 1, Todd Terry started to leave his mark on the dance community around the world. As of today, Todd Terry, "the father of sample" has earned a place in dance music history, and will continue to build a reputation as one of the many who paved the way and opened the door for others to follow.
Reply Notify me 5 Helpful