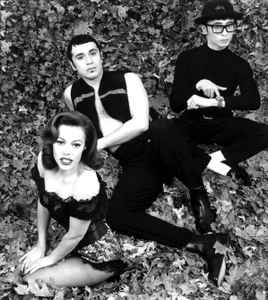 Profile:
Deee-Lite was an American house and club/dance group, formed in Williamsburg Brooklyn, New York, United States. The group's best-known single was "Groove Is in the Heart", from their 1990 debut album, "World Clique". However, Deee-Lite achieved longer lasting success on the U.S. Billboard Hot Dance Club Play chart, where they scored six number one hits.

In 1990, they debuted with the album World Clique, a crossover smash thanks to hits like the looping classic Groove Is In The Heart (featuring the fluid bass guitar sampled from a Herbie Hancock song, vocals by Bootsy Collins, and a rap by a young Q-Tip of A Tribe Called Quest) and Power Of Love (the latter of which hit #35 in the Top 40 Billboard). With Bootsy Collins as musical director on the road, the band toured (without Towa) for two sellout world tours in 1991 opening for the likes of Grace Jones, Prince, Kid Creole And The Coconuts, and Parliament Funkadelic.

With their 1992 follow-up, Infinity Within, Deee-Lite's music turned openly political, with songs about the environment, safe sex and democracy. Lady Miss Kier won the Environmental Media award by the WWF in 1992 and spoke at Princeton University and Cooper Union in 1993.

July 24, 2022
of course groove is heart introduced me to them.. quite late, round about 2001. few years later i bought their album! was a good record. note:i dont think dmitry, who was born in Ukraine, wants be be down as `russian`.

I recall a remixed version of a Deee-Lite song where it repeated "Deeegroovey" over and over again. I can't find it anywhere. It's like one of those remixes that seemed like it was a DJ only record in hindsight and never released as an official single or release of any sort. I wished I could find it again in some form, I'd take MP3 just because I'd love to play on my Ipod. I hate when you can't find stuff you knew so well but can't.

July 12, 2021
its been almost 6 years i discovered the music quality of Deee-lite. Everyone knows their famous single within pop culture "Groove is in the heart" but its just like a cherry atop. The cake is something delicious, degroovy, incredible mix of pre-rave era mixed up with all the best from late 80s and early 90s. All members were unique expressing something so ahead of time back then. Literally the music they have produced is something you want to touch and taste it at least once. No more bittersweetness :-)

May 2, 2021
Like most people, I first heard Deee-Lite with "Groove Is In The Heart" back in 1990 and never heard from them again. I saw a clip of the "Power Of Love" video on a Madonna special on MTV in the late '90's and decided to buy World Clique. Unfortunately the video version was different to the album version so it wasn't until a few years later I bought a copy of "The Very Best Of" in hope it would include the single mix. No such luck. However, it did introduce me to the rest of their amazing back catalogue and make me a fan. I acquired their other LPs and then started to delve into their singles to get the remixes. Even though they were only around for a few years, they really did create some incredible music that still sounds good today.

I remember being 13 when "Groove..." first came out and my "Hippie" Art Teacher saying that she liked the song, thought it was fun (which I agreed 😋🔊), and that she recognized the Herbie Hancock sample, and I remember thinking that it was cool that my Art Teacher and I had that moment. I also remember my Mother and I playing the “World Clique” CD on long drives to nowhere, and how much we liked it! The whole album was fun... I remember the Group being interviewed on MTV about their follow-up album "Infinity Within", and Lady Kier explaining that it was going to be a socially conscious record (“and let's face it, it was a pro choice record”). I remember "Runaway" being the first CD maxi single I ever purchased, and being introduced to the Masters At Work and their remixes ("Take me away, release me, release me, release me from the pain...", indeed!)... Oh, I remember working for Sam Goodies (a record store chain) in 94', and the release of "Dewdrops In the Garden", and how I would push unsuspecting customers into buying "Dewdrops..." when they asked what my favorite new record was... Let's just say I remember Deee-Lite! "When you play it, say it!" (and I'm still promoting them).

"World Clique" is the Group's claim to fame, no doubt "Groove..." had a helping hand in that. Q-Tip, Bootsy Collins, Fred Wesley, & Maceo Parker all thought enough of Deee-Lite to join forces, and they all jammed on a full length that was really unlike anything else in the marketplace. The rubbery beat of "What Is Love?" still scratches my universal itch even today... But it was "Infinity Within" that really added depth to their success, and made me understand that dance music could be a powerful and meaningful force. I remember assembling the eco-pak for that album back in 92’, it made me feel involved and engaged putting it together. (Who said that the group needed to trade in more serious minded songs like “Fuddy Duddy Judge” or "I Had A Dream I Was Falling Through A Hole In The Ozone Layer" for another radio friendly song like "Groove Is In Your Heart", who was that?🙃). "Infinity..." was a sonic extension of "...Clique", but with an awareness you see ("Vote Baby Vote! I'm registered baby!"). Deee-Lite still knew how to have fun though, it wasn't all heavy handed! "Pussycat Meow" proved just that on dance floors, and the Murk Boys turned it into an underground classic with their dark and groovin' remix. You can also hear "Dewdrops..." coming down the pipeline on Deee-Lite's own "Meow" and "Pussy Power" mixes of the song, if you listen closely that is. Later on, "Dewdrops..." showed that the group could adapt to whatever dance music was morphing into next, whether it was Hip Hop Jazz, House, or Jungle, it didn't matter, they did it with ease... Sadly, and rather abruptly it all sort of ended there, the group disbanded, each going their own ways. Towa scored a few classic goodies on his own with "Luv Connection" and "Happy", thanks again to the Masters At Work on “Luv...”, and of course Mr. Knuckles on “Happy”. And I once heard a whisper about Ms. Kier searching through her "records in the attic" or something, but that still remains a whisper of long ago, I don't know if she ever found those records, and if she had, what was she going to do with them... I'll love Deee-Lite always and forever (♾) of course, because I remember just how "Deee-Gorgeous" they really were, a unique little dance group who reminded us all "that Groove really is in your Heart"................................."Your Groove I do deeply dig, no walls on either bridge, my super dish, my succotash wish,...Sing It Baby!".

March 4, 2016
Awesomely talented musicians. One of my fave Dance Music groups. Happy vibes, lively tunes, astounding deep beats, great pleasant vocals... A must listen to and a must see as well!

January 28, 2015
The BEST 90's TRIO....love every single they released and the whole albums they did contain music gems inside ....DEEE LITE is just DEEE LICIOUS !!
Thank u guys for the good music, hopefuly one day u get back Dmitri Brill, Lady Miss Kier and Towa Tei

August 16, 2012
A truly unique and very underrated band way ahead of their time.
They will always be remembered for Groove is in the heart but that was only one little piece
of all the great music they put out.
They mixed together many different music styles and also the fashion of Deee-Lite had a major
influence on designers, especially the deee-groovy retrostyle of Lady Kier.
With this band you can see what in today´s music industry is missing most: Individuality, a very sexy front singer that really can sing, the love for music and not only the money behind and a good mixture through the music genres.
Highly recommended trio!!!!
See 1 reply