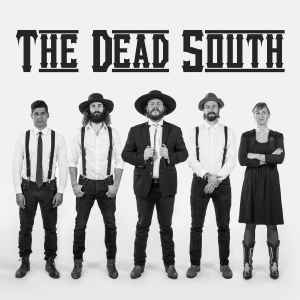 Profile:
A Canadian folk-bluegrass musical ensemble from Regina, Saskatchewan. They sing about murderous, estranged spouses and runaway lover cousins in a boot-stomping acoustic configuration that includes banjo, mandolin, cello and guitar, some whistles, hoots and hollerin’, and finger snappin’. The idea for a rockin’ stompin’ bluegrass band came to Nate and Danny 2012; they had played together before back in high school in a short-lived alternative grunge band. Nate had been listening to Trampled By Turtles, Old Crow Medicine Show, and older bluegrass acts and the two wanted to put their own spin on tradition. This also marked Nate’s very first go at singing. They wrote some originals and tested them out at open mics. Shortly after, Colton, who was into metal, and Scott, more in the singer-songwriter vein, added more bodies to The Dead South. Colton learned banjo and Scott switched from guitar to mandolin. The result was their own unique take on the Bluegrass genre, as none of them actually had any clue what they were doing. But they knew they wanted it to be fun, somewhat tongue-in-cheek, with serious musicianship.
Sites:
thedeadsouth.com, Bandcamp, Facebook, instagram.com, Twitter, Wikipedia, YouTube
Members:
Colton Crawford, Danny Kenyon (2), Eliza Mary Doyle, Nate Hilts, Scott Pringle (2)