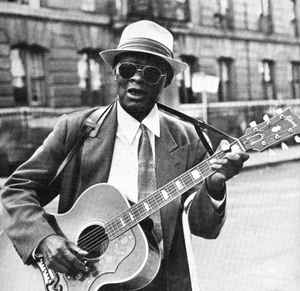 For his early 78 recordings before becoming revered please go to Blind Gary Davis.

Born partially blind, Davis lost what little was left of his sight at a young age. Self-taught on the guitar, he assumed a unique multi-voice style produced solely with his thumb and index finger, playing ragtime, traditional, blues and original tunes in four-part harmony. He frequently performed on the streets of New York near Harlem, where he also came to be a well-known figure. In the 1930s occasionally accompanied Blind Boy Fuller or Bull City Red on recordings as a 2nd guitarist. It should be noted that as a man of faith in his later year, he rarely recorded blues after becoming a Reverend.