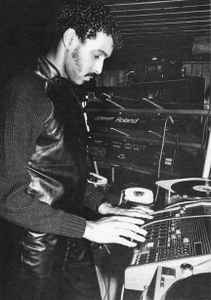 Real Name:
David Franklin Reeves, Jr.
Profile:
American musician, DJ/producer, born in The Bronx, NYC on October 3, 1960.
Also known as Davy DMX (named after the Oberheim drum machine), he got involved with hip-hop by DJ'ing around neighborhoods in Queens. In the early '80s, as a guitarist, he joined with bassist Larry Smith and drummer Trevor Gale to form Orange Krush, a group who recorded a handful of singles, in addition to several backing tracks for Run-DMC, Sweet G, and Lovebug Starski. After the group separated, he worked with Kurtis Blow as a DJ and guitarist, providing significant contributions to "If I Ruled the World" and "The Breaks." Scattered singles like 1984's "One for the Treble" and 1985's "The DMX Will Rock" put him on the map as a solo artist; in 1987, a full-length album called Davy's Ride followed for Def Jam. Apart from occasional behind-the-scenes work on records, Davy DMX also appeared as a member of the Afros, a comical group who sprouted from another group called Solo Sounds. Tuff City released a collection of four-track recordings called FFFresh, albeit without his knowledge.
Sites:
web.archive.org
Aliases:
David Reeves (2), Davy DMX
Variations:
Viewing All | Davy D
D.D., DAVY-D, DJ Davy D, Dave D, Dave D., Davey D, Davey D., Davey Dee, Davey-D, Davy D., Davy-D, Dee Dee

February 7, 2018
This Davy D isn't the same Davy D who produced the Houston artist RAheem (Dancefloor / Shotgun) who is listed above.

December 10, 2002
What is a flames that i'm not supposed to post? Davy D is one of the reasons i got into dj'ing. when i was about 15 he did a show here in Baltimore in 1982 and he took the show. I was amazed at his skills. Few people knew Davy D was Run-DMC's first dj before the late Jam Master Jay. Jay was another one of my inspirations for dj'ing. Davy's album was tight.I really liked the last cut on both sides.
See 1 reply