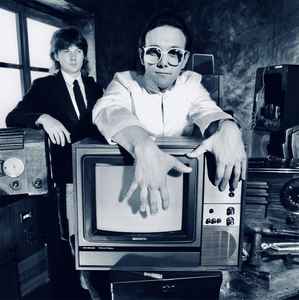 Profile:
Buggles were a British New Wave duo consisting of Trevor Horn (vocals, bass guitar, guitar) and Geoff Downes (keyboards, synthesizers, electric piano, piano, drums, percussion, backing vocals). Best remembered for their 1979 debut single "Video Killed the Radio Star", a #1 hit on the singles charts of sixteen countries, the song's music video was the first shown on MTV in the U.S.A. at 12:01 on August 1, 1981. The same year, a second album: ''Adventures In Modern Recording'' was released, but due to Island Records reading a music critique review in which the writer assumed they were splitting up as Geoff Downes moved onto working with ''Asia'', they were dropped and moved to Carrere Records instead. The album didn't perform as well and so they split up only to perform live occasionally in the 00's.
Sites:
Wikipedia, theartofnoiseonline.com
Members:
Geoff Downes, Trevor Horn
Variations:
Viewing All | The Buggles
Buggles, Buggles As One, Geoff Downes & Trevor Horn (The Buggles), The Buggle, パグルス

Living in the Plastic Age from 1979 predated the French band Air's funky retro lounge sound by decades and has a full fledged Euro synth pop/funk flair that has stood the test of time. From the hit Video Killed the Radio Star to the sublime funky Astroboy. Not a wasted second of instrumentation. NO lengthy pompous guitar licks, bass solos or unnecessary "fat" on this release just pure refined electro pop.
Trevor's voice is in full command and Geoff's ex-prog keys are littered with tasty hooks. As far as I am concerned THIS was where synthy new wave began. Get the remastered cd with the alt version of Johnny on the Monorail and their reggae instrumental Island.
Personally I find their last album Adventures a more mature release but it was in reality a Trevor Horn solo album with very little of Downes in the studio. Both albums are sheer genius.

July 15, 2021
Put down everything you're doing right now and listen to Adventures In Modern Recording in its entirety. Criminally underrated and overshadowed by The Age Of Plastic, it is a perfectly carved slice of new-wave and synth-pop and is in my opinion a one of the best albums I've ever heard from the 1980's. Thank you Trevor x
Reply Notify me 3 Helpful