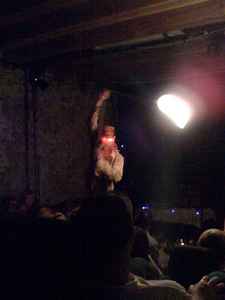 Profile:
mudboy is a performance, installation, video, and recording project that began at Fort Thunder in Providence, RI in the early 2000s. mudboy performed throughout the United States and Europe on homemade and experimental electronic keyboards with the occasional foray into adapted pipe organs. Accompanied by controlled lighting, surround-sound speakers, firecrackers, and smoke, mudboy’s was a self-proclaimed “spell caster,” exploring fantasy, power, control, and the uncanny through a guided musical experience. Though mudboy released nearly two dozen albums and “kits,” and mounted four solo exhibitions, the vast majority of the nearly pitch-black performances were unrecorded and un-photographed. mudboy’s most recent and perhaps final performance was on massive electro-acoustic pipe organ in Dortmund, Germany as part of the International Symposium on Electronic Art in 2010, and is the basis of the Night Eyes album (unreleased) and an installation of the same name at the Mountain Fold gallery in New York City in 2010.

Nearly all of mudboy's albums are out of print, though some have been curated into WFMU's free music archive.
Sites:
mudboymusic.com, irlyon, MySpace, Twitter
Aliases:
Raphael Lyon
Variations:
Viewing All | Mudboy
Mudboy R. Lyon