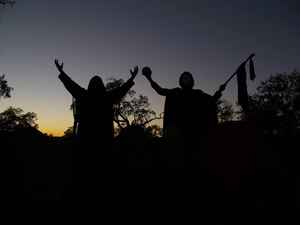 Profile:
Pylar is a Spanish avantgarde metal band was formed in 2012 with members of Blooming Làtigo and former components of Orthodox (2). The project is inspired by prehistoric religions and the occult, hiding their faces behind masks and ceremonial clothing.

Their debut album Poderoso Se Alza En My, released in 2013, was highly acclaimed by international media. Julian Cope said “a must, superb”, and was selected as one of 2013 top albums in several websites. Seven tracks opening a gate to another world with sacred chants, massive guitar riffs plus insane percussions and winds, conforming a picture not easy to describe.

May 2015 sees the release of He venydo a reclamar my trono, their second album including one track devoted to curve linear time through the telling of The Triple Goddess story and the use of music as a powerful sound symbol along with the presence of forgotten techniques.

In March 2016, Pylar released La Gran Obra on tape format, including two tracks inspired by Alchemy as an instrument to transmute metal music into a sound experiment with no equal to date, facing arcane elements such as the long forgotten language of the colours and its dark esoteric simbology.