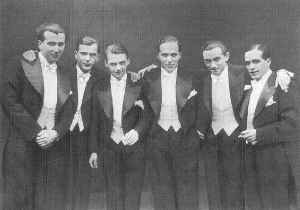 Originally created in imitation of the American The Revelers (2) and called "The Melody Makers," the "Comedian Harmonists," a vocal quintet accompanied by a pianist, developed their own close harmony style. The five singers blended their voices so closely together that there was usually no more than an interval of a twelfth between top and bottom voices; individual singers would emerge from this close vocal texture for solos, and tenor buffo Frommermann, in particular, would contribute comical voice imitations of instruments. The ensemble's repertoire ranged from German Schlager ("Veronika, Der Lenz Ist Da," 1930) and German versions of jazz-tinged American pop songs ("Wochenend Und Sonnenschein" = "Happy Days Are Here Again," 1930) and a vocalized version of Duke Ellington's "Creole Love Call" (1933) to German folk songs ("In Einem Kühlen Grunde," 1932). The Comedian Harmonists recorded first for Odeon (1928-1929), from October 1929 to March 1935 for Electrola.

The group started to be subject to antisemitic harassment from 1932. Once the Nazis had taken over the German government in January 1933, official pressure increased as well. In March 1935, the Nazi-created Reichskulturkammer permanently banned the three "non-Aryan" members, Collin, Frommermann, and Cycowski, from professionally performing or recording in Germany.

The group split into two parts. Both formed new ensembles that tried to attach themselves to the former group's success. The exile group continued to use the name "Comedian Harmonists" (on His Master's Voice export releases), which it had trademarked in Paris in March 1937, or its English equivalent "Comedy Harmonists." The three "Aryan" members, Biberti, Bootz, and the Bulgarian Leschnikoff, remained in Germany and adopted the Nazi-approved name "Meistersextett." In November 1935, they won official permission to call themselves "Das Meister-Sextett Früher Comedian Harmonists" (The Meister-Sextett, Formerly Comedian Harmonists).

Personnel of the "Comedian Harmonists" during their prime: