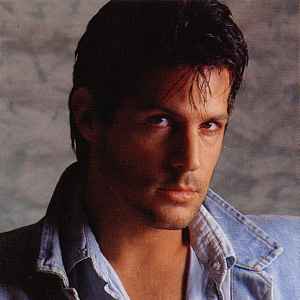 Real Name:
Thomas Beecher Hooker
Profile:
Tom Hooker is an American singer, songwriter and photographer born in Connecticut on 18 November, 1957. After moving to Europe at an early age, he built his career in Italy as a solo artist and the voice of the Den Harrow project. Hooker moved back to the USA in 1994 and currently lives in Las Vegas.

His first single Flip Over released on Harmony in 1980 and in 1981 he participated in San Remo Festival with a song in Italian. In 1985 Hooker met the arrangers/producers Roberto Turatti and Miki Chieregato from the Den Harrow project (fronted by Stefano Zandri), for which Hooker wrote the lyrics to and sang Future Brain (and other songs the next three years). The same year Hooker was signed for Merak Music. With the success of Future Brain, Freddy Naggiar, Baby Records (2)’s owner bought his contract from Merak and released Den Harrow’s album and Hooker’s solo single Looking for Love. Hooker co-wrote and sang all the songs on Den Harrow’s second LP, as well as doing the demos for the third album (English singer Anthony James recorded the final versions). After the success of “Looking for Love”, Franco Donato released an unauthorized album under Hooker’s name, containing his three year old demos. These were recorded while Hooker was signed to Donato’s label Full Time Records.

Other works include:
- starring in Jocks in 1983, a movie with Russell Russell
- co-wroting U.S.S.R. for Eddy Huntington and Boom Boom, Let's Go Back To My Room for Paul Lekakis, both international hits
- co-writing and singing for Elastic Band, a group made up of Hooker and the Visnadi brothers