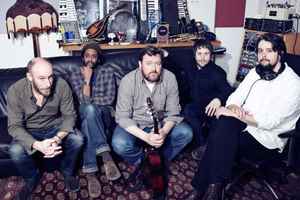 Profile:
Alternative rock band from, Bury, Greater Manchester, England. Formed in 1990, originally called Mr. Soft (later shortened to Soft) and comprised of guitarist and back up vocalist Mark Potter, bassist Pete Turner and drummer Richard Jupp. Vocalist, guitarist and lyricist Guy Garvey was asked by Mark to join the band when they met at college (both were 16 at the time). Mark's brother keyboardist and back up vocalist Craig Potter joined soon afterwards.

They changed their name to Elbow in 1997 after Guy heard a character from a BBC TV Drama "The Singing Detective" say that the word "Elbow" is the most sensual word in the English language, not for its definition, but for how it feels to say and how it looks on the page.

They were also signed by Island Records in 1997, but due to a takeover and indie band jettison-attitude by Universal in 1998, their Steve Osborne produced debut album was scrapped. Only a self-issued (now) ultra rare E.P. and a compilation appearance of one of the songs document this period.

In 2000 they put out their first release proper, an E.P. on a small indie label Ugly Man Records before they were eventually signed to Richard Branson's V2 in 2001.

Winner of the 2008 Mercury Prize (for best British album) for The Seldom Seen Kid.