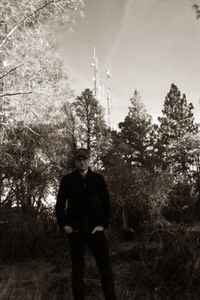 Profile:
Describing his work through the pithy phrase, "I rust things", Jim Haynes (b. 1972) is a California based artist who has developed a vocabulary of decay that he has applied to photography, sculpture, installation, and sound. He has exhibited internationally at institutions such as The Exploratorium (San Francisco), WestSpace (Melbourne, Australia), Jack Straw Productions (Seattle), Eyedrum (Atlanta), Diapson (New York), and The Lab (San Francisco).

Haynes has published his work through Editions Mego, Ghostly International, Helen Scarsdale Agency, 23five Incorporated, Intransitive, Elevator Bath, and others. He has collaborated with Loren Chasse, Irr. App. (Ext.), and Steven Stapleton. He is also a contributing writer for The Wire. Haynes was a directors for 23five from 2003-2015 and is the lone occupant at the Helen Scarsdale Agency.
Sites:
helenscarsdale.com
In Groups:
Coelacanth, Die Propylgruppe
Variations:
Viewing All | Jim Haynes
J B Haynes, J. Haynes, J.B. Haynes