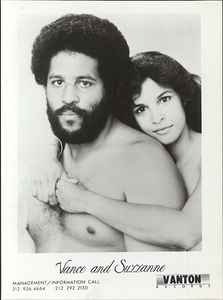 Profile:
Collaboration between Richard Vance Turner and Sussanne Slaughter of the group Unyque. Susan Watson Turner (Sussanne's real name) was a background singer for many bands in New York including Sister Sledge. She began her professional career at the Karamu Theatre in Cleveland, Ohio, and since then, she has directed, performed, produced, and written over a hundred plays for off-Broadway and regional theater. In 1984 she married Richard Vance Turner and together have 3 children. Richard passed peacefully at his home in Middletown, NY, on 14th of May 2015 and Ms. Watson Turner is a professor of theatre and multimedia performance at Lehman College of the City University of New York [AH]
Members:
Richard V. Turner, Sussanne Slaughter
In Groups:
Unyque
Variations:
Viewing All | Vance And Suzzanne
Vance & Suzzanne, Vance And Suzanne, Vance And Suzzann