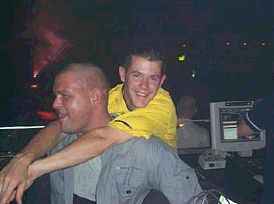 The first single was released in April 1999. Entitled Keep Da Clubstyle, it entered the german charts. The follow-up Go Right For, released in December and featuring Tanja's voice (Tat Morena alias Tanja Korb), reached and remained at the top of the German Dance Chart. It also reached # 7 in the Media Control Dance Chart, # 11 in the German DJ Playlist, # 2 of the French clubs chart.

The next single to be released was Omen III, closely inspired from Magic Affair's hit. One could find on the CD a version made by the Klubbheads project. It reached # 47 in the Top Singles and # 11 in the French Hit Media Control.

The next single is the beautiful Doin' It Again, still with Tanja. It reached # 35 in the French Official Single Chart and remained 24 weeks on top 100. It also hit # 1 in Swiss Dance Chart and # 50 in the main Swiss Single Chart. In Germany it went # 57 and # 15 in Austria.

DJ Valium's debut album was simply entitled The Album. It contained 3 CD, with many remixes, megamixes, and music videos.