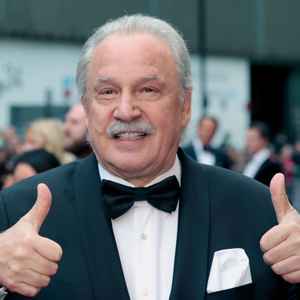 Real Name:
Giovanni Giorgio Moroder
Profile:
South-Tyrol musician, complete in every aspect (Ortisei, Trentino-Alto Adige, April 26, 1940). Composer, arranger, producer, performer and DJ. Winner of 3 Academy Awards, 3 Grammy Awards, 3 Golden Globes, USA, is considered one of the most innovative and influential musicians in electronic and disco music. Founder of Oasis label and Musicland Studios, in the 70s invented the Munich Sound (often confused with Italo-Disco which will arrive later) and created the first icons with Donna Summer and Roberta Kelly. Today, he is back to DJing for passion.

Baby Blue / Chase / From Here To Eternity / I Feel Love (track that breaks all music rules ) / I wanna funk with you tonite (best track of Giorgio) / I wanna rock you / Love To Love You Baby / Utopia (Me Giorgio) / What a night / Sparks - Tryouts For The Human Race - all these are diamonds / brilliants from Giorgio. Giorgio Moroder - is a GENIUS. Thank you very much, Giorgio! And huge thanks for Flashdance soundtrack, especially Lady, Lady, Lady track.

July 16, 2022
Giorgio is a living genius and pioneer of electronic music. Watch a movie "Flashdance" or a Flashdance soundtrack - this movie is all the genius of this musician. Just an amazing soundtrack, especially the composition of Joe Esposito - Lady, Lady, Lady. All Giorgio albums from 1975 to 1983 are simply amazing in melodies. The man who paved the way for all electronic music with his albums from 1975 to 1983. I listen and listen to his releases during the heyday of disco music (1975-1983) and I will say that no one could even come close to his talent. The man who became the personification of disco style music. A man ahead of his time. A man to whom we should bow low for everything he has done for electronic music. And a man who is still alive and to whom we have to thank a hundred thousand times for all that he has done for music.

April 25, 2022
26 April Happy Birthday Giorgio Moroder
thanks for recorded
like a

Losers saying he didn't know how to use as moog after the fact he recorded from here to eternity before the song in ?

Salty ppl who clearly got turned down by him for jobs making up their usual crap. Yes, he doesn't deserve all the praise he gets...

Wendy carlos and Kraftwerk were doing it a couple years before.. Those should be your comparison points if you want to act like pretentious snobs lol
See 1 reply

January 15, 2021
The fact that no archival label has put out a collection of his pre-disco work is surprising. Not just That's Bubblegum and Son of my Father, but the various one-off singles and other things he produced... there's a lot of great music there!

July 24, 2014
For what it's worth, he also wrote a goofy vocalese novelty called "Doo-Bee-Doo-Bee-Doo," which Benny Hill got hold of, had his arranger Ronnie Aldrich cook up an instrumental version, and it became standard background music for his comedy sketches. You'll recognize it the moment you hear it.

July 19, 2014
Mr. Moroder is a pioneer and a legend....He has little street creed due to his disco past, which is ridiculous and unfortunate...he belongs in the Hall Of Fame...3 of his biggest 'disco' hits rocked (Bad Girls, Hot Stuff, Call Me)....oh, and he basically created Electronic music (precursor to today's EDM) with I Feel Love....Won 4 Grammies + 3 Oscars...Donna Summer won 3 Grammies with 9 total nominations under his production....Daft Punk dragged him out of 'retirement' and now he is touring the DJ circuit in his 70s.....Bravo Giorgio!
See 5 replies

September 25, 2009
You can hardly find someone like Giorgio. He did not produce just I Feel Love, The Chase and E=MC2 album, as it may look from perspective of electronic dance music hardcore fan. Besides of these gems he made tons of crappy stuff, but also many of timeless pop classics like You Take My Breath Away, What a Feeling, Love Kills with Freddie Mercury or theme song from Neverending Story and many more than average songs and sountracks.
This man has got at home three Oscars for his work on Top Gun, Flashdance and Midnight Express, three Grammys and four Golden Globes. I believe you can't be more wrong than speaking about one-hit-wonder or low production skills with Giorgio Moroder together.
See 3 replies

January 18, 2004
This is the man responsible for maybe the most influential electronic track of the last 25 years, 'Donna Summer's' - 'I Feel Love'. This was his production all the way and was the blueprint for all subsequent Techno/Trance tracks.
See 6 replies