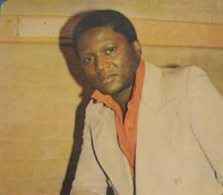 Real Name:
Cecil Bunting MacCormack
Profile:
African singer, composer, and musician born in Freetown, Sierra Leone on 3 December 1945 (Died London 11 July 2015)
At the age of six, he began playing the harmonica and penny-whistle, making his first public appearance at age eight. Later, he started playing both the banjo & guitar and singing in church choirs. Playing with friends in a band called The Daverns, he requested his name not be given during any public broadcasts due to parental displeasure. After taking the stage name Kenny Marson, he joined the band Soundcasters '66 and went to the UK where their first single was released in 1967. Two years later "Oh How I Miss Her" was a minor UK hit but problems with the bands home office forced them to leave for Germany. They performed in Europe for a year but then split up. He joined a series of groups and in the late 1970's finally teamed up with The Afronationals producer, Akie Deen who was also from Sierra Leone. His second single with Deen Discolypso brought a commercial breakthrough and the follow-up 'Let Me Love You / Love You Forever confirmed success. In 1981, his first LP "Let Me Love You" became a disco hit. By using session musicians such as Alfred Bannerman, George Lee, Jake Sollo, and Papa Mensah, his disco/funk/calypso fusion featured English lyrics to a thumping dance beat and as a result, Bunny Mack was voted musician of the year by Africa Music magazine and received a gold disc for "Let Me Love You".
Sites:
Wikipedia
Aliases:
Cecil Bunting MacCormack
Variations:
Viewing All | Bunny Mack
B. Mack, Bunny Mac, C B MacCormack, C. B. MacCormack, C.B. Mac Cormack, C.B. MacCormack, Cecil B. MacCormack, Cecil Buntin McCormack, Cecil Bunting McCormack, Cecile B Makormak, MacCormack