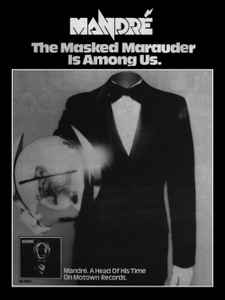 Real Name:
Michael Andre Lewis (M. André)
Profile:
Mandré was the alter ego of Andre Lewis.
When Maxayn disbanded, Lewis signed a contract with Motown Records and developed the persona of Mandré. While Maxayn had been playing funk and soul, Mandré was Andre's project to add electronic elements and also shift the sound toward more spacey funk and disco.
In both his albums and live performances, Mandré was represented as the "mystery man from outer space". His face was always hidden behind a futuristic mask, which made him look like a robot.
Mandré was promoted by Motown as being "funkier than Parliament". However, after 3 albums which went largely unnoticed, Lewis ended his relationship with the label to pursue independent production. He retained the rights and title to the Mandré name and released a final album ("Mandré 4") by himself in 1980.
Sites:
Wikipedia
Aliases:
Andre Lewis
Variations:
Viewing All | Mandré
Mandre, Mandre', Mãndre

February 3, 2020
Having replaced George Duke in Zappa's band after his departure, to my ears, Andre was influenced by Zappa (he even covered "Dirty Love)…
His other obvious influences were Parliament/Funkadelic, though even wackier and more spaced-out IMO.

Mandre was an interesting artist who deserves more credit than he's gotten.
Reply Notify me 2 Helpful

December 25, 2012
Considering the level of achievement that reached Detroit Techno in history, it still astonishes me that very few know about the music from Mandré, the Man From Outter Space. Precursor of many things to come, Michael Andre Lewis settled through Motown (through where he released his three first solo LPs) the pillars of Deep Space kind of electronic music, and I believe you know very well what I'm talking about. His four solo albums are priceless and timeless accomplishments of future music, with the hottest approach of Soul, Funk & Tech you can possibly imagine.
Reply Notify me 7 Helpful