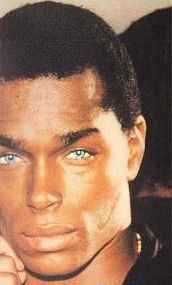 Profile:
Model, Singer and dancer on the New York fashion scene during the late 1970s and 80s.
Sterling was the adopted son of actor Raymond St. Jacques (Cotton Comes To Harlem).
Sterling St. Jacques was a party boy and top male model in the 1970's. His eyes appear blue (contacts) in the but they were actually grey in person. He was tall and breathtakingly handsome, he was also a professional dancer who traveled frequently between New York and Europe and he was a regular at Studio 54,he moved so gracefully on the dance floor; many considered him desirable.  He was a beautiful specimen, he stood over 6'0, he had smooth chocolate skin, his physique was awesome and his eyes were gray.This was before colored contact lens; this was his actual eye color.  He was stunning and striking. His dance partner and good friend was runway icon Pat Cleveland. He even released an album. Allegedly, even back then, rumors circulated that he shared the beds of some of the most desirable men in the world, including: singers, rockers and actors, white and black. St. Jacques contracted AIDS and died in 1984 in New York City, not knowing who gave it to him.
Sites:
imdb.com, Facebook
Variations:
Viewing All | Sterling Saint Jacques
S. S. Jacques, S.S. Jacques, Sterling, Sterling Saint-Jacques

I admit it.
I'm interested.
This era's Disco or Club or Dance Music in which a model or dancer or cocksucker is limousined into a music career seems like Fine Art compared with almost anything after the '90s; Paris Hilton has less personality than Barbie and Bruce Willis' "The Return of Bruno" is indgestible to all but the most cast-iron stomach at the Defense Intelligence Agency.
In this non-musician-speaking-over-canned-or-session-dance-tracks subgenre, DIVINE is the overweight apotheosis in the house; how is it the French are so impeccable in their demand and supply of these airbrushed, ahem, 12" vehicles, somehow simultaneously elegant yet cheap?
When a mullet-headed German in a Members Only jacket dances like an Egyptian it is schlock, but when this Sterling Shakes his Saintly "Zhock" it's got smoky AMANDA LEAR potential...even the original chocolate class act EARTHA KITT touched on this 'Aristocratic Dance Single' template, (or 'an anaerobic exercise in the spread of AIDS') to much dancefloor pandemonium and the promise of promiscuity.
Don't infer an inch of judgement on my part, butt when you don't know who just expired in your ass after weeks of homoerotic athletics of an Olympian ambition that would make THE VILLAGE PEOPLE's Felipe Rose Blush, you DEF'LY don't know "who gave it to [you]". KLAUS NOMI is considered the first famous victim of this government-engineered depopulation conspiracy, but it looks like Sterling was neck and neck with him: 1984.
...Belongs on Halston's Bang and Olufsen turntable under a discarded silk cravat somewhere in Fire Island.