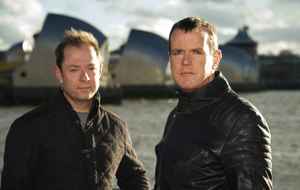 Profile:
Long-running trance production outfit that has been affiliated with the Platipus label since its start-up. Most well-known for their early acid hits like "Red Herring" and "Two Full Moons And A Trout".

Union Jack.... Art of Trance and Terra Ferma.. This duo represents the pinnacle of trance music to me. Pushing the boundaries of the genre, Simon and Claudio awe inspiringly combines extremely hypnotic sound structures with lush, vivid, and mystical soundscapes. Building layers over layers, each of their releases offer a deep, spiritual journey....

I think each member bring a unique talent into the collaboration. Simon has an unprecedented skill in arranging the elements to throw the listener into an hypnotic whirlpool; and while Claudio's tracks are also very hypnotic, where they REALLY shine is painting soundscapes. Bring those two and you get an unstoppable, mind-blowing trance experience! Cactus, Two Full Moons and A Trout, Lollipop Man, and There Will Be No Armageddon are some of the examples what these guys are capable of.

Trance on, and don't forget to seek the remastered versions!

June 20, 2014
Legends of actual true trance Union Jack stands next to Art Of Trance and others who were there since the very beginning of the early nineties. A duo that never sold out and even after twenty years still manage to deliver original and good sound. I'm talking about the recently released Spasm, which is a total killer, definitely has that 90s trance sound in it. Even though these guys has been on some hiatus. Platipus is pretty much dead, they did those Platipus Archive releases in last two years with remastered oldies that are impossible to resist.

Union Jack, Art Of Trance, Airwave, John '00' Fleming, JOOF Recordings, Platipus, Bonzai and some others are the true masters of actual progressive and trance of the present days. Living legends that never jumped in the mainstream bandwagon. Even though the scene is pretty much dead, vinyl is dead (in trance scene), these few people should be respected at what they do best - keeping the real trance scene still alive!