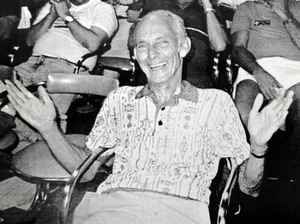 Profile:
Moon was born in Fayette, Mo., and attended schools in Saint Joseph and Kansas City, and Terre Haute, Ind.

He sang in his first quartet in high school and was a member of the band, orchestra, glee club and a-capella choir.

The avid musician was first introduced to barbershop when he was 16 years old.

Moon joined the Navy and resided in Long Beach in 1949 where he met his wife, Millye. In 1950, the couple had their daughter, Melanye.

In 1951 Moon became the chorus director of the San Fernando Chapter where he wrote his first arrangement, "Cecelia."

When Moon moved to Anaheim in 1955, he began attending Fullerton Chapter meetings and joined the Downey Chapter in 1958.

After making way to the Whittier Chapter in 1970, he was honored with a lifetime membership in 1972.

In 1978, Moon was selected by the quartet for its Far Eastern District's Hall of Fame award.

Moon's other achievements are the Barbershopper of the Year at Whittier and the International Chorus Director from the FWD Chorus Directors' Guild awards.