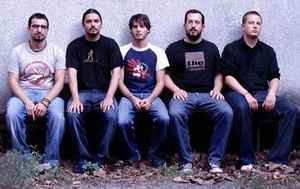 Profile:
The Evpatoria Report is a Swiss (Switzerland) post-rock band. Its name comes from the city of Evpatoria in Crimea, where there is a parabolic antenna RT-70 (P-2500) which sends messages into space (A Message From Earth, Cosmic Call) that try to describe human life (the Evpatoria message). The band was born in January 2002, and it consists of two guitars, a bass, drums, a violin, and a keyboard. They offer an instrumental rock combining serenity, power, and intensity. The Evpatoria Report have played concerts in Paris and toured throughout Switzerland, playing with bands such as Red Sparowes, The Appleseed Cast, and Mono.
Sites:
Facebook, MySpace, Bandcamp
Members:
Daniel Bacsinszky, David Di Lorenzo, Fabrice Barney, Laurent Quint, Simon Robert