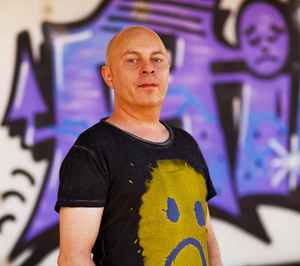 Real Name:
Oliver Lieb
Profile:
Frankfurt based DJ & producer Oliver Lieb is involved in the production of electronic music since 1988. With more than 250 singles and albums including remixes for Faithless, Moby, Snap, Yello, Human League, Mory Kante, Utah Saints to name a few, he made it in the premier leage of international producers and keeps surprising and amazing people with his extraordinary sounds and diversity.

At the age of 14 he started playing bass in several Funk/Soul/Jazz bands. Oliver also got in touch with electronic music (Pink Floyd, Kraftwerk,Yello, Jean-Michel Jarre) and discovered a new and an endless horizon of expressing himself.
In late 1989 Oliver’s first record FORCE LEGATO “System” got released by Dorian Gray resident DJ Torsten Fenslau on his Abfahrt label. The single gained great worldwide reactions and almost hit the official German charts.

In the years to follow Oliver released everything in the electronic genres from downtempo and chill-out to hard experimental techno and trance. His project Spicelab on Sven Väth’s legendary Harthouse label established a platform for his highly appreciated sounds, which developed into one of the most important projects of the label including the release of three full length album releases.

Oliver never wanted to focus on just one specific genre he simply created several pseudonyms for each of his different styles. His LSG and Paragliders releases on Superstition Rec. are still considered as one of the most influencing and timeless trance projects and were developed for more than 10 years and 5 Albums.
His maxis and albums got licensed on Hooj Choons, Yoshitoshi, Platipus, Duty Free, Magic Muzic and many others. After leaving Superstition in 2004 it was time for doing something new especially since the whole music scene went through big changes and somehow redefined itself.

After locking himself into his studio to create new sounds and going into all kind of different directions Oliver announced the start of his own label “Maschine” in summer 2005 which is distributed worldwide by “Neuton” and online exclusively through Beatport and released his first single “Solieb - Circus Maximus” in July. The reactions were great and two more maxis followed until the end of 2005. Maschine is about to turn into a main source for high quality forward electronic music and grabs more and more peoples attention.
In 2007 Oliver started a new company doing mastering and cutting vinyl. After all this was a logic step since he is known for a very high sound standard on his own productions and so he added some high end analog mastering gear to his studio to guarantee sound quality enhancement also for his clients.
After the endless process of planning, constructions and moving in to the new studio and finally focusing on the new company he took a bit of a break from producing and djing - also to focus on a new sound and directions.

Hello! I wonder if someone can help me to identify the name of a DJ mix by Oliver Lieb, should be released before 2002...I owned it, and then unfortunately lost it. If I remember correctly, its name was related to space... Regarding the tracks: I think Shecan was there, and around the end there was a mixed-in voice saying "Let the Bass Go", or something like that, and then sirens started. It was extraterrestrial! If someone remembers the name or any other details how I can find/buy this mix, please let me know. Thanks!

For me Oliver Lieb stands for the very essence of electronic music. He´s got his own style and what an amazing style that is. Every track this guy makes is a journey for the listener. His music is incredibly deep and always makes me feel good. He´s got quite a few aliases, my favourite is when he works under the name of L.S.G. I can hardly keep count of all the good tracks he´s released under that alias. I also like his work under the namne Paragliders. Nice, good feeling in thoose tracks. Excellent to dance to, or just to get yourself cheered up. This is truly a guy to respect, excellent artist/producer.

Oliver Lieb has dominated the Dance scene since day one. Oliver Lieb started his journey at the label Harthouse and has made many timeless tunes there under many aliases. Whatever tune you hear with him you will hear that it comes from the heart and he always deliveres high quality music. In the last years Oliver has made mostly techno which many djs have played all over the world. His Dj sets contains Hard Techno that builds to trance with still a tech touch on it. I have followed his carrer since day one and he truely is one of the best guys in Techno history...

December 9, 2003
Lieb stood up the commertialisation of trance music. He pushed his unique sound through time. Very interesting and broad spectre of style he works in. Into deep is one of my best easy(tech)listening albums ever. Very familiar, sincere, simple and beautiful. He just invented his own formula, and he knows where the edge is. Respect!
Reply Notify me 4 Helpful