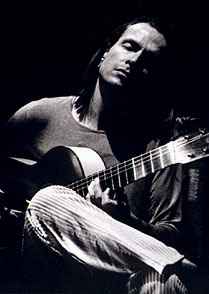 Real Name:
Ottmar Liebert
Profile:
Ottmar Liebert is a Grammy Award nominated "Nouveau Flamenco" guitarist. He leads the band Luna Negra, which has supported him on most of his albums and on tour. 10 of his albums have been certified Platinum in the United States and he has received five Grammy Award nominations. He is currently based in Santa Fe, New Mexico, in the U.S.