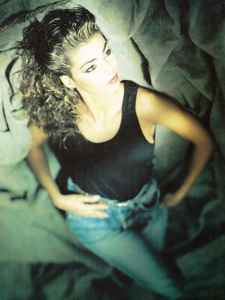 Real Name:
Sandra Lauer Cretu
Profile:
German pop singer Sandra was born Sandra Ann Lauer in Saarbrücken, Germany on May 18, 1962. She was a successful pop and euro disco singer in the 1980. She began her career at seventeen as the lead singer of the trio Arabesque in 1979, and on the following tour in 1982, Sandra met keyboard player Michael Cretu. She started performing solo in 1984, and in January 1985 Cretu produced her album The Long Play. The two became a couple, and moved to Ibiza, Balearic Islands, Spain. They were married on Jan. 7, 1988, and they became parents to twin boys; Nikita and Sebastian, on July 6, 1995.

October 8, 2021
Sandra was very popular in Italy in the middle of eighties decade more then Kylie.
Kylie was played in radio/TV very rarely before the new millennium comes.
Madonna win in all ways from 80’s to present.
Reply Notify me 1 Helpful

February 21, 2019
As someone who grew up in the UK, I have to admit that I had never heard of Sandra until after the millennium (once we got the internet!).

It's really weird, her songs are totally catchy but it seems she was given virtually zero exposure in the UK.

I see her first few singles were actually released in the UK, but honestly I don't remember hearing any of them. No Top Of The Pops either, that I can recall.

She seems to be the exact kinda thing that the UK would of lapped up in the middle of Madonna hysteria, and even up to the late 80's when Kylie broke into the charts.

Just seems weird to me that such a popular act (who sang in English) never broke out in the UK.
Reply  See 9 replies Notify me 6 Helpful