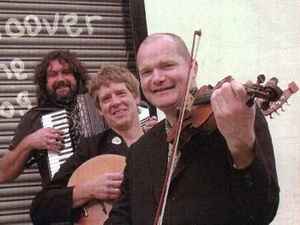 Profile:
Paul Hutchinson grew up in Bournemouth and studied piano and church organ. At the age of 17 his father persuaded him to take up the accordion and form a ceilidh band. The Old Pull And Push rapidly became established, performing all over the UK, and appearing at many folk festivals.

After moving to Wales in 1997, Paul met composer John Hymas and together with Tony Harris formed the trio Hoover the Dog. Their music was difficult to categorise but attained a cult following amongst musicians and aficionados of good music both in the UK and Europe. Collaborations followed with Fluxus (Belgium) to form Okavango, Diversions (The Dance Company of Wales) and the internationally renowned violinist Jan Hruby (Czech Republic).

One of Paul’s core beliefs is that music shouldn’t be pigeon-holed and has an open mind to quality music regardless of the source. His ‘Desert Island Discs’ would have to include music from: Prokofiev, Bach, Emerson Lake and Palmer, Robert Plant, James Taylor, West Gallery, Tin Hat Trio, Nick Pynn, Arvo Pärt and Dino Saluzzi.

In addition to performing and teaching, Paul is also active in community work and various local projects including a 17th century music group in Twickenham, The Squirrels. He has two children who are also musicians, and a dog, Milo. Paul divides his time between Wiltshire and London is a cryptic crossword fanatic, photographer, vegetarian and a long-suffering supporter of AFC Bournemouth.
Members:
John Hymas, Paul Hutchinson (5), Tony Harris (5)