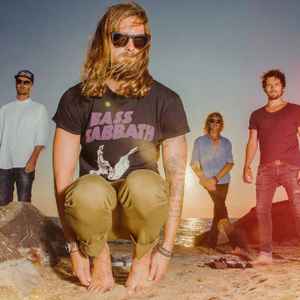 Sunset Sons are a band brought together by a love of music, surfing and snowboarding. They formed when Bournemouth-born singer Rory was singing cover songs on the piano at a bar in the French surfing resort of Soorts-Hossegor, where he worked washing dishes. His repertoire – everything from Coldplay to D12 to Queens Of The Stone Age – intrigued Newcastle native Jed. Along with two other friends the pair formed a touring covers band, roaming the Alps and playing to winter holidaymakers. The band then started writing songs themselves, and found themselves in a flurry of record label hype. Music industry bosses were coming to Val d'Isère to watch them play. “We were told they rarely leave London,” says Australian bassist Pete, “but there they were, up in the mountains with the snowboarding crowd, who can get pretty wild.” Two years later, sitting outside the very same beach bar and with a collection of their own original material, they signed their deal with Polydor Records. The plan now is to take the songs on the road, both in Britain and abroad. And, of course, to find time to squeeze in some surfing.
Sites:
sunsetsons.com, Facebook, Twitter, YouTube, play.spotify.com, instagram.com
Members:
Jed Laidlaw, Pete Harper, Robin Windram, Rory Williams (2)