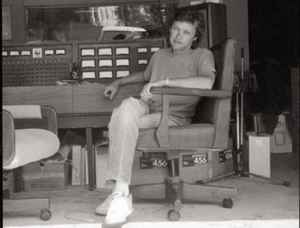 David began playing the bass and electric guitar when he was eleven. He recorded an album with the Renegades on Crescendo Records when he was thirteen. He later recorded with the band "Rosebud" featuring the vocals of Judy Henske which released an album on Reprise records. During the 70's he went on to record with such notable artists as Tom Waits and Roger McGuinn and worked on many records as a bass guitarist with producer, collaborator and longtime friend Jerry Yester including records by Aztec II Step and Billy Mernit.

He recorded and co-produced records for The Association (for whom he was the musical director during the 70's) and produced and engineered many records out of his studios in Thousand Oaks California including platinum albums by Toad The Wet Sprocket and Primitive Radio Gods. He recorded albums for Randy Chance, John Henry Raskin, Brad Nack and many records for producer/songwriter Marvin Etzoini including his solo effort "Marvin's Country" (album of the week BBC). He was also the founding member of the seminal California band The Flaming Pitts whom he produced and engineered in the early 70's.

In the mid 80's he conceived, recorded and produced the Jon Wayne "Texas Funeral" album on which he also wrote the material, played and "sang". He was accompanied by "Jimbo" (Jim Goodall) who played the drums. The group was expanded to include "Ernest Bovine" (Doug Livingston) and "Billy Bob" (Bruce Rhodewalt) who was later replaced by Timmy Turlock (Tommy Spurlock). It has since become a "cult classic".