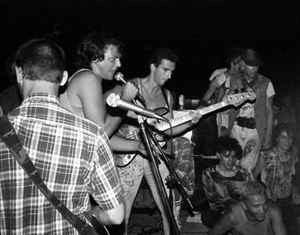 Profile:
From Alessandria, Italy, born in the early 80's as "Peggio Punk" and then become "Peggio Punx" were a Peggio, a change that reflects a turn toward sound sounds a lot less hardcore. The group was notable for the often experimental music (in the first distorted guitar album "type mandolin, until the very last pieces away from the canons punk - hardcore), and for working hard and reflective texts, texts openly sympathetic to the current self far-left "workers 'autonomy' that make them one of the most politically punk decided and deployed the entire Italian scene. In the early eighties are very active in the Italian scene, active incident to the social self "Subbuglio" of Alessandria and participating in numerous concerts, alongside bands like Wretched, CCM, Raw Power, etc., around the occupied social centers peninsula. Their self-produced discs are in the full spirit of DIY punk admittedly more "busy". It was recently reprinted a collection containing their discography, and also thanks to this reissue even worse now Punx are one of punk - hard core Italian most popular ever.
Sites:
Facebook, lovehate80.it
Members:
Alberto Pisani, Federico Massarino, Flavio Gemma, Giorgio Bei, Marco Laguzzi, Mauro Carosio, Mirko Degrandis, Paolo Chilin
Variations:
Viewing All | Peggio Punx
Peggio, Peggio Punk, Peggio Punks