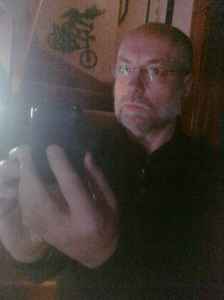 Profile:
Pioneering minimal synth musician born in 1950 in Nürnberg, Germany. He is the son of a violinist and US Army Lutheran chaplain. Because of this, Bender moved around a lot as a child, living briefly in Nurnberg, Boston, California, Japan, Fort Knox, and New York City before settling in Cincinnati. He played drums in a group called Barbi And Cen with his neighbor Jack Gorski. After Jack moved to Glasgow, Bender bought a keyboard and started working on solo recordings. He mentions Velvet Underground, Can, Tony William, Drumbo, Samuel Beckett, Alfred Jarry, Pere Ubu, Soft Machine, and Robert Ashley as influences.
John Bender's music was self-published via cassettes and through the Record Sluts label. After 1985 he disappeared from the music world. However, in 2016 he resurfaced in Europe for a couple of live gigs mainly playing old material with improvisations.
Sites:
Bandcamp
In Groups:
Johnny Vortex
Variations:
Viewing All | John Bender
Bender, JB