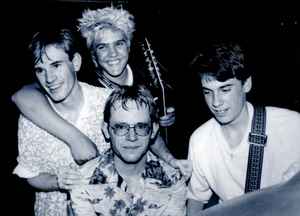 Profile:
One of the biggest New Zealand bands of the early eighties. They came out of the post punk scene in Auckland and in 1981, after a national tour with Propeller labelmates Blam Blam Blam and The Newmatics had a number one single with Seemeego-o which was the first NZ record ever to enter at number one. They split in April 1983.
Sites:
simongrigg.info, audioculture.co.nz
Members:
Mike O'Neill, Peter van der Fluit, Tony Drumm, Yoh
Variations:
Viewing All | The Screaming Meemees
Screaming Mee Mees, Screaming Meemees, Screeming Meemees, The Screeming Meemees