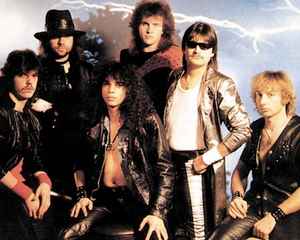 Profile:
Heavy metal band from Ghent, Belgium.
The roots of the band can be traced back to as early as 1976, when drummer Mario Pauwels and bass player Marnix Van De Kauter started jamming together in bands called Trash and Stonehenge. In October 1980 the very first Ostrogoth lineup was formed when Mario and Marnix teamed up with guitarist Jean-Pierre De Keghel and singer Luc Minne.
Due to disputes and musical differences the band decided to split up in the summer of 1988. The band reformed in 2002 for some live shows, but split again in the same year. In 2010 Mario, Marnix, Rudy and Marc revived Ostrogoth again.

The name "Ostrogoth" came from a Germanic tribe that influenced political events of the late Roman Empire on a moderate scale.