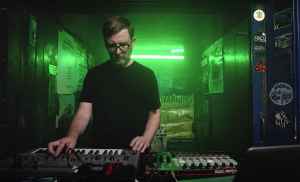 Real Name:
Emile Facey
Profile:
First inspired by Kraftwerk and the Street Sounds hip-hop compilations in the early 1980s, London based Emile Facey was hooked on electro from an early age. In 1998 he started promoting electro events in London and connecting with other producers and DJs from the UK and abroad. This led to him building his first bedroom studio and, after a few years of learning, honing and recording, Emile’s Plant43 project saw it’s first vinyl release in 2006 on the much-missed Ai Records. Since then he’s released over 100 tracks on many highly respected labels including Frustrated Funk, CPU, Semantica, Shipwrec, AC Records, Bleep43 Recordings, Cultivated Electronics and Trust.

He is also a graphic designer, illustrator and co-founder of bleep43.com, which is dedicated to celebrating electronic music. Since 2002, Emile has played live alongside DJ Stingray, ERP/Convextion, Surgeon, DJ Overdose, Urban Tribe and many others.
Sites:
Bandcamp, Facebook, instagram.com, MySpace, SoundCloud, Twitter
Aliases:
Emile Facey
Variations:
Viewing All | Plant43
Plant 43

August 1, 2020
Artists like this have a big impact on my musical experience in life!
Reply Notify me Helpful

November 5, 2014
Plant43. Possibly the best and most intricate electro / techno producer out there for the past 7 or 8 years. One would compare him to Gerald Hansen. He's in that league. With a bit more of a running theme through his records. You can definitely expect quality. Buy on the spot. Good quality control and has been on some ace labels so you know it's excellent. An artists to watch for.
Reply  See 1 reply Notify me 16 Helpful