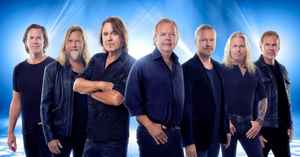 Secret Service is a Swedish pop/new wave band, originally formed 1979. Ola Håkansson, former vocalist of Ola & The Janglers and then a publishing manager at Sonet Music, teamed up with Tim Norell and Ulf Wahlberg to write a few songs that they submitted to Melodifestivalen, the Swedish qualifiers for the European Song Contest. They did not win but decided to continue working together and changed their band's name from Ola+3 to Secret Service. Besides Ola Håkansson (vocals), Tim Norell and Ulf Wahlberg (keyboards), the original lineup included Tonny Lindberg (guitars), Leif Paulsen (bass) and ​Leif Johansson (drums, ex Ola & the Janglers).

Tim Norell however, who along with lyric writer Björn Håkanson (no relation), penned most songs of the band, did not appear with the band on stage or on the album covers. Secret Service's first single "Oh Susie" became a hit in Sweden and several other countries of Europe and South America. "Oh Susie" was no 1 in 29 countries.

The same titled album included another hit, "Ten O'clock Postman" Other singles followed, with their synthesizer based number "Flash in the Night" hitting the charts all over continental Europe. Later, Ola Håkansson sang duet with ex-ABBA's Agnetha Fältskog, "The Way You Are".

In 1987, Håkansson, Norell, and Wahlberg released "Aux Deux Magots", their sixth album as Secret Service. The other members of the band had quit by then and were replaced by multi-instrumentalist Anders Hansson and bassist Mats Lindberg. Björn Håkanson had at that time left the group as lyricist and Ola had taken over that part together with Alexander Bard. (Army Of Lovers)

1988-2000 - Hiatus
1988, Håkansson, Norell, and Wahlberg decided to go separate ways. Håkansson continued as Norell's partner together with Anders Hansson and became a well known songwriting trio. In 1992, Håkansson and his associates established Stockholm Records as a joint venture with Polygram. They produced Army Of Lovers and The Cardigans, among others.

Wahlberg continued working as a producer, songwriter with both local and international artists. He started his own company XTC Productions in 1989 launching Swedish artists abroad. He also started up his own professional recording studio - XTC Studios.

2000 - Reunion
1999 Ola, Ulf and Tim got together to compile a new compilation with Secret Service songs, Top Secret – Greatest Hits. The work took place in XTC Studios and it all led to the recording of four new tracks for the album.

Secret Service had fans in the Soviet Union and other countries of Eastern Europe during the Cold War. Faced with a 1980's gala in Moscow in December 2006, Ulf and Tim re-assembled the band, however, with a new lineup. Because of family and business reasons Ola decided to not join the band at live performances and tours. So together with Mats Lindberg (bass) from the 2nd lineup, they invited Mikael Erlandsson (vocals and guitar) and Jaime Borger (drums) to join the new live version of the band. Since then the band has successfully toured all over Russia and other territories with this lineup.

2012 was the time for a world-wide release of ”The Lost Box”. An album consisting of more or less forgotten and never completed songs from the years behind, but very well achieved by the audience. The album was also distributed as a vinyl album 2017 by B-Stars.

2019
On Dec 3, 2019 the band released the single “GO ON”, with music and lyrics by Tim Norell. The arrangement is made in collaboration with Anders Hansson.