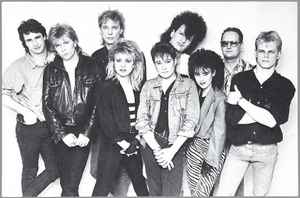 I've Got The Bullets

Profile:
Dutch pop rock band, which was based in Rotterdam and existed from 1985 until 1990. Their name was taken from the motion picture "Rebel Without A Cause", in which actor James Dean shouted: "I've Got The Bullets", shortly after the character played by Sal Mineo was shot down by the police.
Members:
Cees Trappenburg, Frédérique Spigt, Jan De Ligt, Max Mollinger, Ocki Klootwijk, Peter van Gameren
Variations:
Viewing All | I've Got The Bullets
Bullets