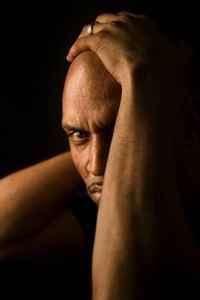 Real Name:
Orlando Voorn
Profile:
As one of the first Dutch musicians to establish a vital connection between Detroit and Amsterdam, Orlando Voorn has long been recognized as one of the Netherland’s most original and inventive producers in the world of electronic dance music.

Voorn began djing at the tender age of 12 and went on to win the Dutch DMC DJ Championships in 1986 with his own characteristic blend of hiphop and electro. Towards the end of the eighties he acquired his first sequencer, packed away his turntables and turned his hand to producing.

Following a series of dancefloor tracks recorded for the now defunct Lower East Side Records under the monniker of Frequency in the early nineties (Where Is Your Evidence, Kiss The Sky…), he was introduced to Juan Atkins (Industrial Metal, Game One) and went on to work with both Derrick May and Blake Baxter (as one half of the Ghetto Brothers). Voorn was also recording as Nighttripper (Tone Exploitation), Format (Solid Session - one of the most sought after classic techno records until its re-release in 1998), Basic Bastard, The Living Room, Baruka, Fix (Flash on Kevin Saunderson’s legendary KMS label), Dope Dog, Boy (Paco Di Bango’s World) and Stalker (The Stalker/The Riderman)… Many of these tracks can be heard on the double cd Best of Nightvision.

March 28, 2022
One of the best names in techno music. "Never Black President" is a monster of a track.

May 13, 2020
For anyone interested here is my bandcamp link https://orlandovoorn2.bandcamp.com/ enjoy

March 22, 2017
Unbelievable talent. All the respect to Orlando Voorn for his output. Thank you.

DMC was founded in 1983 and did not have its first competition until 1985 where Roger Johnson won. Orlando Voorn came 2nd in the 1986 DMC World DJ Championships where he famously stormed the stage, grabbing the mic from host Tony Prince, and declared "is this a mixing competition or a scratch competition?".