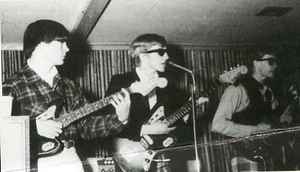 Profile:
Garage rock band from Greenville, SC, active from 1966 to 67 and lead by Rudy "Rude" Wyatt. 'Lost One' by The Roots featured as B-Side to three of the four singles by The Wyld. It was credited as by The Wyld even though only Rudy Wyatt was involved in The Roots. Apparently the record label boss, Major Bill Smith, wasn't prepared to pay to master extra tracks for the B-Sides.
Some Texas compilations feature The Wyld because some of their records were issued on a Texas label.
Many releases call the band 'Wyld'. Photo of an original record label demonstrates use of 'The' (see images).
Members:
Rudy Wyatt
Variations:
Viewing All | The Wyld
Wyld