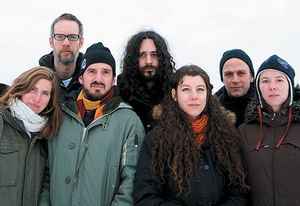 Profile:
A Silver Mt. Zion is a group led by founding Godspeed You Black Emperor! guitarist Efrim Menuck, together with other Godspeed members Sophie Trudeau and Thierry Amar.

To some extent, A Silver Mt. Zion was born out of a desire on the part of the Godspeed players to work in a smaller musical ensemble; in effect, to escape some of the constraints that often accompany writing and arranging music democratically with nine musicians. As well, Efrim simply wanted a vehicle to realize some of his own musical ideas that would not necessarily work well within the context of Godspeed.

For the band's second and third records, the line-up expanded to six players, including Rebecca Foon, Ian Ilavsky and Jessica Moss, and the band re-named as The Silver Mt. Zion Memorial Orchestra and Tra-la-la Band. Scott Levine Gilmore joined the band for Horses In The Sky, and now there were seven.