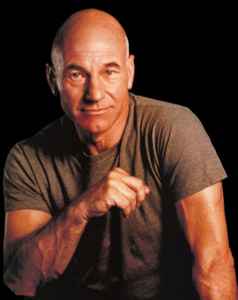 Real Name:
Patrick Hewes Stewart
Profile:
Patrick Stewart, OBE (born 13 July 1940, Mirfield, West Riding of Yorkshire, England) is an English film, television and stage actor. He has had a distinguished career in theatre for nearly fifty years, including performances as various characters in Shakespearean productions. However, he is most widely known for his roles as "Captain Jean-Luc Picard" of the starship Enterprise in Star Trek: The Next Generation. Stewart was appointed an Officer of the Order of the British Empire (OBE) in the 2001 New Year Honours list, and knighted in the 2010 New Year Honours for services to drama.
Sites:
Wikipedia, imdb.com
Variations:
Viewing All | Patrick Stewart
Captain Picard, Sir Patrick Stewart