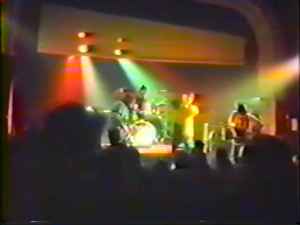 Profile:
Tacoma-based My Name took hardcore-tinged pop-punk an extra step with their intelligent lyrics, complex drum arrangements and melodic vocal hooks. In 1992, they released their debut album, Megacrush, on Seattle label, C/Z Records. Megacrush won some critical acclaim and helped build their name in the Northwest. Soon after its release, the band gained spots on tours with All and Bad Religion, which helped build a national following for the band. In 1993, they released their second album, Wet Hills and Big Wheels. By this time they had opened for a whole crop of successful bands, including Soundgarden, Primus and Jesus Lizard. In 1996, the band followed up with their third album, Rocks for the Jocks, on Instant Records.
Members:
Abe Brennan, Dave Gleza, Fred Speakman, Robb Williamson, Trevor Lanigan